Savor the Flavors of Sangria! 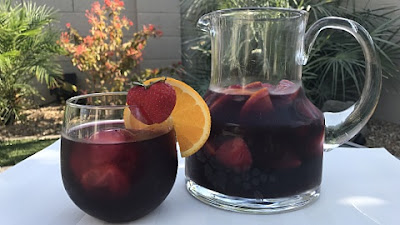 In last week’s Wine Wednesday feature I mentioned that I used the Beaujolais I reviewed (that I wasn’t all that impressed with) to make Sangria.  As a result, I’ve gotten several requests for my Sangria recipe. I’ll be happy to share, but first, a little about Sangria.
First of all, if you can roll your R’s, please do, it seems to elevate this red wine punch into something a little more posh.  Say it with me, “sahn – GDEE – uh”.
Sangria is Spanish in origin and typically made with red wine. The name is believed to be derived from sangre, the Spanish word for blood, likely referring to its deep red color. Americans were introduced to Sangria at the 1964 World’s Fair in New York City, where it was the featured drink in Spain’s pavilion.
There are likely as many Sangria recipes as there are people who make it. In addition to the red wine, there is usually some sort of brandy or liqueur, sometimes spices, fruit juices and of course fresh fruit.  The mixture is refrigerated for several hours or overnight while the fruit imparts its natural sugars and flavors.  Sangria is served chilled over ice without the fruit.  You may choose to garnish with additional fruit.
There are now many premade Sangria’s and Sangria mixes on the market. I would encourage you to make your own. It’s so easy and so much better.  Serve it with tapas, tacos, or whatever you wish.  Just Savor the Flavors!

Pour the bottle of Beaujolais in a pitcher.  Add the grape juice, orange liqueur and super fine sugar.  Stir until the sugar dissolves. Add the fruit and stir.  Refrigerate for 4-5 hours or overnight – stirring occasionally.  Pour over ice and garnish with an orange slice and strawberry. I like to freeze strawberry slices into ice spheres for presentation. 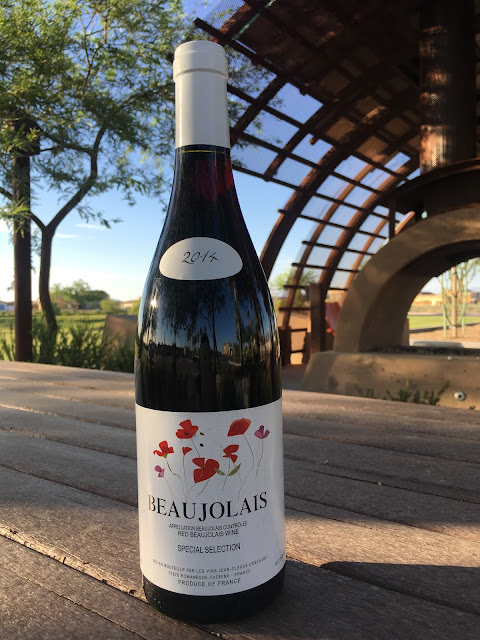 Beaujolais – a white wine lover’s red! As the summer starts heating up, I tend to gravitate more toward lighter dishes and white wines.  However, there are exceptions, and a Beaujolais is always one of them. Beaujolais takes its name from the wine producing region of the same name in France.  The primary varietal in Beaujolais is Gamay.
Beaujolais is a light-bodied easy-drinking red wine that is generally very fruit forward and low in tannins. There are different classifications for Beaujolais; Beaujolais , Beaujolais Villages and Crus Beaujolais (which usually doesn’t say Beaujolais on the label, but rather the name of the Cru or sub region – these being of the highest quality).  The classification is determined by the area where the grapes are grown, with basic Beaujolais and Beaujolais Nouveau being the largest area and producing the most wine, and Cru Beaujolais being the most exclusive.
Beaujolais is a great “staircase” red for those trying to introduce themselves to more red wine, because for a red wine, it is very low in tannins. This is due to the unique way that Beaujolais wine is made.  It is made by a method referred to as semi-carbonic maceration.  I may be oversimplifying here, but basically instead of grapes being crushed, whole grape clusters are placed into vats or tanks. The weight of the fruit presses down on the grapes at the bottom, releasing their juices. When the juice comes in contact with the inherent yeast of the grape skins, it starts to form carbon dioxide which in turn forces the oxygen out of the tank. The lack of oxygen causes a chemical reaction where the grapes start to ferment on the inside making them explode. This process takes 4-8 days after which the juice is drained and then the remaining juice is pressed. The two juices are then combined to create the finished wine. Beaujolais/Beaujolais Nouveau (always released on the third Thursday of November) is intended to be consumed within a year of harvest, Beaujolais Villages, 2-3 years and Crus can be aged even longer. Often, Beaujolais Crus are produced with a more traditional method other than semi-carbonic maceration.
This week’s Wine Wednesday feature, the 2014 Les Vins Jean-Claude Debeaune Beaujolais Special Selection is a basic Beaujolais. Ironically, I found this to be a little too basic for me.  There are some very good Beaujolais on the market, but sadly, in my opinion this wasn’t one of them. Perhaps this should have been sold/consumed earlier? The nose with notes of currant, violet, cedar and plum was quite enjoyable, but the wine did not deliver what the nose suggested.  I found this one to not be as fruit forward as I like, rather lackluster with a finish a little too tart and short for my taste. However, we added fruit, refrigerated it for a few hours and voilà – Beaujolais makes delicious Sangria.  We enjoyed this with Fajitas.  Try also with Grilled Chicken Tacos. Click the links below to print or save the recipes.
Beef Fajitas 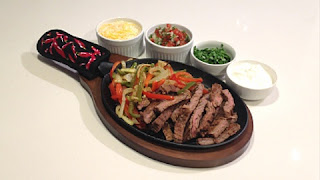 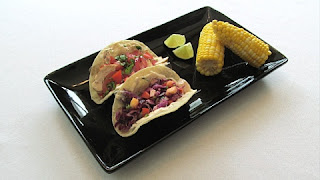