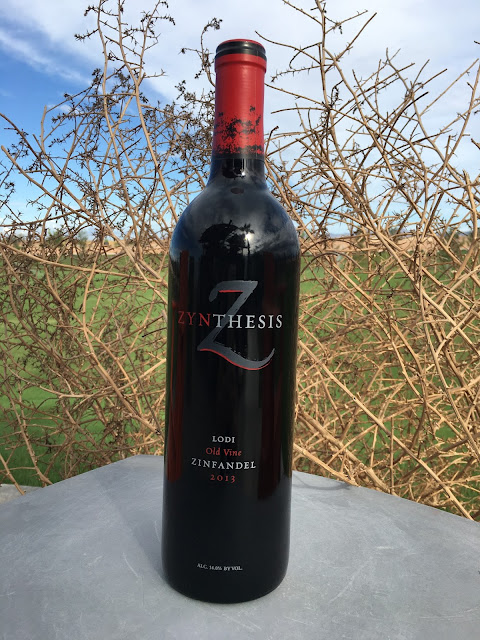 There seems to be a trend among Lodi winemakers when naming their Zinfandel. It seems the name must include a play on words. For instance you remember “Zinphomaniac” which I featured last week in an episode of Wine and Opine and then there’s the ever popular “7 Deadly Zins”.

This week I bring you Zynthesis.  It too is a Lodi old vine Zinfandel. The play on words here seems to point to Synthesis (combination, fusion).  Here the wine is predominantly old vine Zinfandel sourced from vines 30 – 100 years old but also the winemaker adds Petite Sirah and depending on the vintage a splash of another varietal.

Here’s a bit of winemaking/labeling info you may or may not know. Labeling laws in the US allow a wine to be listed as a single varietal if it is made up of a minimum of 75% of that varietal. The other 25% can be any other combination of grapes.  Quite often winemakers add other varietals to enhance their wine.  By doing so it can add an element that they feel is missing to make a more desirable wine.

To get the most out of this wine, decant! Yes, decant! Many wines are great right after the pour, but this one needed decanting. In the case of a young wine such as this particular one it made all the difference.  Upon pouring the wine (prior to decanting) I actually found the nose to be somewhat unpleasant. There were notes of smoke and spice also forest floor and leather but the fruit seemed overwhelmed lost in the background somewhere behind the alcohol.  I swirled and sniffed and walked away several times. After about 30 minutes of exposure the wine opened up and delivered a much better experience. Notes of plum, and blackberry came to the forefront and the forest floor disappeared (thankfully). On the palate it was slightly jammy, with delicious raspberry and black pepper notes and light to moderate tannins.

This wine was much better the second and even the third evening.  Again I say, decant.  I tend to want to enjoy a wine right away, but a little patience can make a world of difference.  It made me go from wondering what to do with that second bottle I’d purchased to looking forward to sharing it.

We enjoyed this with pizza (sausage) one night and jambalaya the next and by itself the third night, each night finding it more favorable.

I think it would be wonderful with a raspberry chipotle barbecue sauce over pulled pork as well.To print or save my Jambalaya recipe, click the link below. 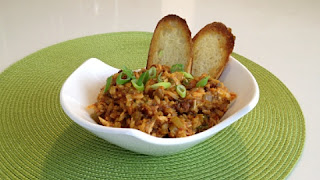